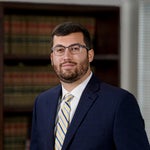 Samuel M. Bloom was born and raised in Charleston, West Virginia. He attended West Virginia University for his undergraduate degree, earning a Bachelor of Arts in Philosophy in 2016. Samuel was an active member of Alpha Epsilon Pi, the largest international Jewish fraternity in the world, and served twice as his chapter's President. Samuel attended West Virginia University College of Law and earned his J.D. from there in 2019. Samuel served as Bailey & Wyant. PLLC's Summer Clerk in the summer of 2018 and has now returned to Charleston to join Bailey & Wyant, PLLC's Charleston office as an Associate. Samuel currently resides in Kanawha City with his wife.