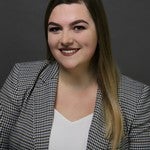 Lauren was born in Albuquerque, New Mexico and was raised in Huntington, WV.  She attended Hendrix College in Conway, Arkansas where she received her Bachelor of Arts in Politics.  While in college she competed on the Student Congressional Debate Team and interned with the Prosecuting Attorney's Office for the Juvenile Court of Faulkner County.  Lauren attended the West Virginia University College of Law earning her J.D. in 2020.  During her time at West Virginia University College of Law she was a member of the travelling Lugar competition team, served as Secretary and Judge Liaison for the Moot Court Board, was Judge Liaison for the 2020 National Energy and Sustainable Development Moot Court Competition, and worked as a student attorney practicing in the General Litigation Clinic.  She also graduated law school as a member of the Order of Barristers.

Lauren chose a legal career because she wants to participate in the growth and development of West Virginia.  Having spent the majority of her life in West Virginia, she takes pride in its' accomplishments and progress.

Lauren is an avid tennis player and enjoys drawing, reading and travelling.  She served as a Summer Clerk for Bailey & Wyant in 2019 and has returned to join Bailey & Wyant PLLC's Charleston office as an Associate.