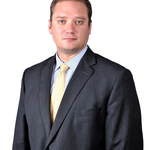 His practice has primarily been focused on the representation of businesses and individuals in the areas of products liability, asbestos litigation, mass torts, toxic torts, professional liability, personal injury, insurance coverage and general insurance defense.