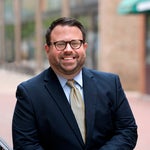 Jordan K. Herrick is originally from New Martinsville, West Virginia. He attended college at Marietta College in Marietta, Ohio, where he graduated cum laude and earned a Bachelor's of Arts in Political Science. Jordan was an active member of Delta Tau Delta International Fraternity while at Marietta College, as well as various other Marietta College organizations, including the Marietta College Wind Symphony. In 2006, Jordan was a recipient of the Adair Prize awarded by the faculty to a graduating senior for outstanding building of morale, esprit de corps, and loyalty to the ideals of Marietta College. Jordan earned his J.D. from West Virginia University in 2009 where he graduated in the top 20% of his class. Upon graduation from law school, he moved to Charleston to join the Bailey & Wyant team. Jordan resides in Charleston's Historic East End with his wife and two daughters and is an active member in the East End community.